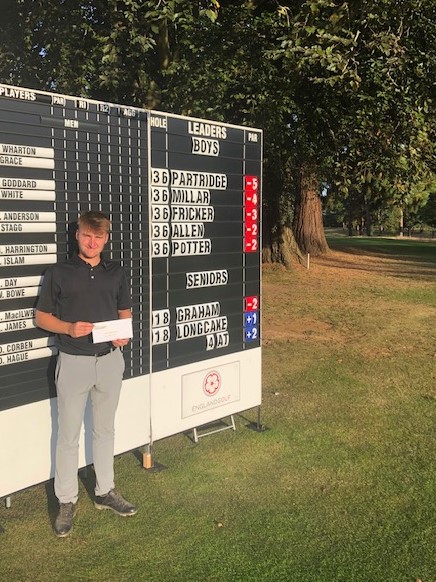 England Golf held the Champion of Champions Tournament for men, senior and junior County Champions at Frilford Heath Golf Club over the weekend of 14/15th September.

The Junior event saw George Fricker (Woodbridge), pictured right, finish 3rd after rounds of 70-71 for a 3 under par total of 141. The junior champions from 31 Counties took part in the event which was won by Ben Partridge (Epsom Golf Club) with 69-70 for a 5 under par total of 139.

The Seniors event had 28 Counties represented with the Suffolk Champion, Peter Revell (Bungay & Waveney Valley) carding 84-86 for 170 and 28th place. The title went to Steve Graham from East Sussex National with 70-72 for a total of 142.

30 Counties were represented in the men's event. Habebuul Islam (Ipswich) the Suffolk Men's Champion carded 77-77 for 154 which saw him finish in 21st place. Toby Burden representing Hampshire took the title at the 1st play off hole after he finished tied with Jake McGoldrick from Staffordshire, both players carding 4 under par scores of 140.